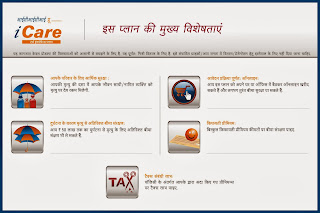 Posted by Nivesh Mantra at 10:37 No comments:

IRDA Life Insurance Regulations 2013-Do you know these changes?


5.       The minimum policy term will be 5 years and minimum premium paying term for non single premium policies will be more than 5 years.


7.       Premiums will be equal throughout the period of the policy.


8.       One can pay their premium only 30 days before the date of premium due. This move has both negative and positive effects. Negative effects are like if your employer ask you submit investment proof before 31st January of FY and your Life Insurance premium is due by 1st March then you are unable to produce it buy paying advance. So you need to ask for the TDS done from your employer afterward. Earlier to this, there was a provision to pay the advance premium and avail discount on this. Agents used to woo policy holders to pay advance payment and have a discount on this. Reason is, they will get a handsome commission immediately.


9.       For monthly premium payment mode only during the start of policy insurance company may accept 3 months advance payment.


10.     Service tax will be collected over and above the contractual premium. Now there will be a clear idea about how much you are paying as tax and how much will go towards premium. So this move will actually bring transparency.


11.    Selling of same plan and same tenure by splitting plans will not be allowed henceforth. It means from now onward your agent will not be able to sell the one product with same tenure by splitting Sum Assured (which increases his number of policy count but cumbersome for policy holders to maintain the data.) Like Jeevan Anand with tenure of 20 years can not be split like 5 policies of  each SA Rs.5,00,000. Instead you have to buy only one Jeevan Anand for tenure of 20 years and SA Rs.25,00,000. But your agent can sell with different terms.


12.    Existing plans of insurance companies will be revamped to suit the new regulations. Hence plans of LIC’s Jeevan Anand or Jeevan Tarang may come out with new features.


13.    Policies sold during the transition period (from 20th Feb 2013 to 1st Oct 2013) will have the option either to have continued their policies with existing features or move to new features.


14.    Your premiums will come down drastically as from now onward new mortality table will be referred to fix insurance premium.  Especially LIC which is using the 1994-96 Ultimate Mortality Rates will move to IRDA’s Indian Assured Lives Mortality (2006-08).


15.    The agents commission structure was revamped.


16.    The product literature must indicate whether the policy is protection oriented or saving orientd.


17.    Benefit illustration like guaranteed and non guaranteed at gross investment returns of 4% and 8% respectively signed by both prospective policyholder and agent. It must form the part of the policy document.


2.       But the minimum maturity value should be equal to the value of units available on maturity date.


4.       Single premium health insurance products will not be available from now onward.


6.       For policies issued for minors the date of commencement of policy and risk commencement will be same.


7.       At any point of time death benefit will not be less than 105% of total premiums paid including top up but excluding service tax.


11.    If policies discontinued within 5 years then they can revive the policies within two years or complete withdrawal without any risk.


12.    Partial withdrawal will be available after 5 years only. But for child policies one can not withdraw until minor insured attained the age of 18 years.


13.    Benefit illustration like guaranteed and non guaranteed at gross investment returns of 4% and 8% respectively signed by both prospective policyholder and agent. It must form the part of the policy document.


14.    Loan will not be available under linked products.


15.    Heighest NAV Guaranteed Plans are not allowed to operate.


16.    Closed ended funds are not allowed to operate.


17.    One can pay their premium only 30 days before the date of premium due and 3 months for monthly premium payment schedule.


18.    Splitting of policies will not be allowed in the case of linked policies.


20.    Yearly statement will be sent showing the charges and the current fund values.


These are the major points which one must know. The list is big to go by, but I mentioned the major changes one most know.Cancel reply

An article in Business Today states that RBI is to issue Inflation Indexed Bonds from 4th June 2013. Before going through the details, let us define what are Inflation Indexed Bonds - Inflation-indexed bonds (also known as inflation-linked bonds or colloquially as linkers) are bonds where the principal is indexed to inflation. They are thus designed to cut out the inflation risk of an investment. Now see below the news as appeared in Business Today:

RBI to issue inflation-indexed bonds from June 4
PTI New Delhi Last Updated: May 15, 2013 | 16:45 IST
The Reserve Bank on Wednesday announced it will launch inflation-linked bonds every month, starting June 4, to attract household savings of up to Rs 15,000 crore this fiscal so as to discourage investments in gold."RBI, in consultation with Government of India, has decided to launch Inflation Indexed Bonds (IIBs)," the central bank said in statement.The first tranche of the IIBs 2013-14 for Rs 1,000-2,000 crore will be issued on June 4, it said, adding that the maturity period of these bonds will be 10 years. The total issue size will be Rs 12,000-15,000 crore in 2013-14.After the first tranche, bonds will be issued on last Tuesday of every month.While the first series of the bonds will be open for all class of investors, the second series issue - beginning October - will be reserved exclusively for retail investors.RBI said the bonds are pursuant to the Budget proposal to "introduce instruments that will protect savings of poor and middle classes from inflation and incentives household sector to save in financial instruments rather than buy gold ".Both the government as well as the RBI are concerned over the rising gold imports as its putting pressure on Current Account Deficit (CAD), which widened to historic high of 6.7 per cent in third quarter of 2012-13.Gold and silver imports last month shot up 138 per cent, year-on-year, to $7.5 billion.Announcement of the bonds to discourage investments in gold is the second major move by RBI in the last three days.On Monday, it had placed restrictions on banks to import gold.Giving details of the for first series of IIBs, RBI said while the coupon rate (interest rate) will remain fixed, the principal amount invested in the bonds will be linked to inflation based on Wholesale Price Index (WPI)."Thus these bonds provide inflation protection to both principal and coupon payment. At maturity, the adjusted principal or the face value, whichever is higher, will be paid," RBI said.

Posted by Nivesh Mantra at 06:24 No comments: 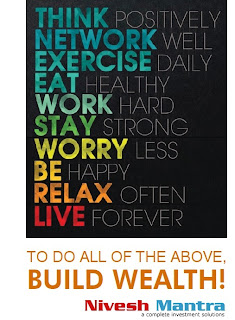 http://bit.ly/XGrFSO
Posted by Nivesh Mantra at 05:36 No comments:

http://bit.ly/XGrFSO
Posted by Nivesh Mantra at 10:06 No comments:

Rajiv Gandhi Equity Savings Scheme or RGESS is a new equity tax advantage savings scheme for equity investors in India, with the stated objective of "encouraging the savings of the small investors in the domestic capital markets.". It was approved by The Union Finance Minister, Shri. P. Chidambaram on September 21, 2012. It is exclusively for the first time retail investors in securities market. This Scheme would give tax benefits to new investors who invest up to Rs. 50,000 and whose annual income is below Rs. 10 lakh.

The Scheme not only encourages the flow of savings and improves the depth of domestic capital markets, but also aims to promote an 'equity culture' in India. This is also expected to widen the retail investor base in the Indian securities markets.

The maximum Investment permissible under the Scheme is Rs. 50,000 and the investor would get a 50% deduction of the amount invested from the taxable income for that year.

·         It provides additional tax benefits over and above the present tax savings schemes under the Income Tax Act.

·         Gains, arising of investments in RGESS, can be realized after a year. This is in contrast to all other tax saving instruments.

·         Investments are allowed to be made in installments in the year in which the tax claims are filed.

·         This scheme has a long run benefit of educating the retail investment segment and thereby moving towards financial inclusivity in the country.

·         Success of this scheme can lead to transfer of assets from traditional savings instruments such as bank deposits and FDs to the capital markets, leading to diversification in retail investor portfolio and also leading to more productive "capital formation" assets.

A new retail investor can make investments under the Scheme in the following manner:

2.       An investor can invest in eligible securities in one or more transactions during the year in which the deduction has to be claimed.

3.       An investor can make any amount of investment in the demat account but the amount eligible for deduction, under the Scheme will not exceed fifty thousand rupees.

5.       An investor will be eligible for a deduction under subsection (1) of section 80CCG of the Act in respect of the actual amount invested in eligible securities , in the first financial year in respect of which a declaration in has not been made, subject to the maximum investment limit of fifty thousand rupees.

8.       An investor may also keep securities other than the eligible securities in the demat account through which benefits under the Scheme are availed.

11.    Deductions claimed will be withdrawn if the lock-in period requirements of the investment are not complied with or any other condition of the Scheme is violated.